Randy Barracuda – On The Low Again 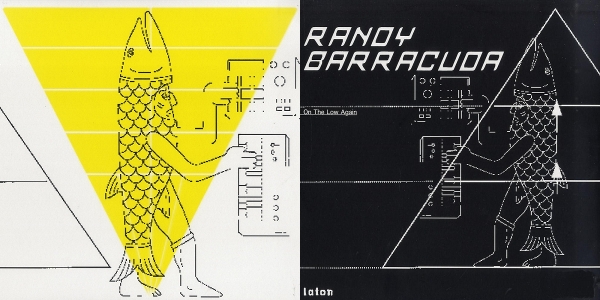 Credits:
All tracks by Randy Barracuda

Randy Barracuda is best known as one of the pioneers of the Skweee-movement – Skweee is often referred to styles like wonky, hip hop and electro funk but has certainly it’s own demented twist –  as well as half of legendary electro bassoutfit duo Imatran Voima and for releases under various aliases for such labels like Mighty Robot Recordings, Tellektro, Sähkö, Flogsda Dancehall and Harmönia which he co-founded with Mesak in 2006 (Turku, Finnland).

„On The Low Again“ (Laton 053) cognates to „On The Low“ (Harmönia, HRMN-12) which was previously released in early 2010 containing material from the same Bergweg recording sessions 2009-10, Rotterdam.
The trademark sound from the originator of spastic scandinavian synth-funk style again dominates this 6-track debut for the austrian based Laton label, but this time mighty Randy Barracuda taking it to new levels of super compression, flips and signals away from the Lo-fi / 8-bit sound to slicker production styles, twisted R&B rhythms, layers it with a symphony of bleeps and keys alongside the usual sugar rush melodies and bump-n-grind b-lines to give it a incredible fresh slant.
„On The Low Again“ is as undeniably catchy as it is speaker rumbling, an unbashed banger over the top and there is little to stopp the RABA invasion.

„I already gave the album to all the Sex Tgas, Flogsta Dancehall, Disques Mazout, Harmönia and Dodpop -people. And they loved it to death.“
(Randy Barracuda)

„The brilliantly named Randy Barracuda has delivered a record that will sit next to Eero Johannes’ Planet Mu effort as a genre-defining moment. Six slices of electro funk from Randy, taking Skweee to new levels and sqkweeekiness.“
(bleep.com)

„Randy Barracuda advances the Skweee game to the next platform… advancing the Skweee style with shower-faced synthlines riding 20″ rimmed snares and Volvo estate bass… tinged with a swaying Balearic aura ideal for twilight cruising and such.“
(boomkat.com)