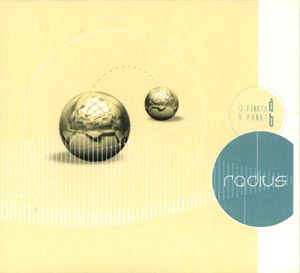 The new album Iz punkta A v punkt B (From dot A to dot B) is the debut record by Radius, released on the extraordinary austro-russian Laton label.
Radius aka Serguei Malkin, born in Kemerovo in Central Siberia started his career as a professional film-cutter in his hometown.
In the early 90ies, he began to realize various successful musical projects. Between 1991 and 2002 he released five solo albums under his FIZALIS imprint, that sounded stylistically releated to dark ambient with elements of post industrial, folknoise and post easy listening.
The album Polja tischiny from 1995 with NERO, a collaboration with Mikhail Semjonov, went furhermore in the direction of industrial ritual.
FRACTAL HEADS, a formation operated together with Dmitrij Kravtschuk from Novosibirsk, is Serguei Malkin’s most well known musical manifestation so far. Their debut album Light on the stepped plates from 1999 is spanning from static electronic scapes to spare rhythm constructions and neo avant jazz injections.
FRACTAL HEADS played several festivals in Russia like Sibir nastuplenje simy (Siberia at the beginning of winter) and Siberian Nova Kultura in Kemerovo, Solotoi Doscht (Golden Rain) in Novokusnetsk, Kulturnyje geroi 21 veka (Cultural heroes of 21 century) in Moskau and Svobodnyi poliot -3 (Freefly-3) in St.Petersburg.
Beside, as DJ Mutant he is spinning records and releasing mix-CD’s on his own dancefloor label.
Actually in 2005, Serguei Malkin goes in different directions with Radius. On new debut release Iz punkta A v punkt B (from dot A to dot B), he consequently and conceptually uses latest soundgenerating technologies versus, old and mostly primitive computers and free software of soviet fabrics for his ends.
Strange micro-electronica with elements of toy music follows a journey through an old calculation schoolbook – from dot A to dot B.
Seemingly compositorial infantilism in combination with musical helplessness stays hiden behind serious titles. Musical parts that are intensely influenced by childrens play.
All in all, RADIUS tonework style is unmistakable, excellently made, experimental, powerfull, funky fresh and even siberian soulful.