Pomassl is one of the dazzling figureheads of the cutting edge electronic music scene. The Austrian based psycho-physio musician, sound and recording artist, Laton label frontman and turntablist, counts to the early protagonists and today’s exploring pioneers of new electronic and advanced experimental play. From 1996 up till now, the founding member of Laton has released seven full-length solo-albums, three vinyl ep’s, did numerous contributions on labels such as Laton, Raster-Noton, Craft, Mille Plateaux, Ash International, Nexsound. Uniquely realized thanks to prototypes and electronic instruments that he developed himself, Pomassl’s current work is the quintessence of power and astonishment among all the musical genres that he’s explored as an artist up to this point – but reduced to their simplest parameters. Pomassl is one of the emblematic figures of a sonic pursuit pushed to the extreme. Fuelled by a reputation for being an unparalleled performer. 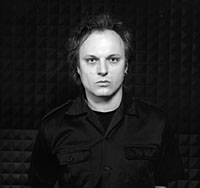