This genius sampling neo-concrete music-mechanic and charismatic individualist from far east russian city Vladivostok, have cultivated previously unheard new forms of outstanding unique smashing rhythm driven power-electro torpedos, between highly danceable and listening tunes over the last 3 years in nearly isolationism of his hometown, where he is working on daytime as a forwarding agent for the Trans Siberian Railway. Evgeny Beresnev’s experiments and activities as a musician goes back to 1994, when he started first to experience with a collection of absolute unfit instruments and gear like primitive keyboards, toy-guitars, everyday life tools, dishes and porcelain, low-frequency-generators from military threshold and a simple effect-box. After including a sampling machine, collecting all sorts of found sounds and sampling noises ranging from a various sonorities and ambiences of his workday in the surroundings of crackling industrial Vladivostok, his sound archives was expanded essentially and as a result the „experimental electro-mechanical project“ Park Modern was originally formed in 1999. 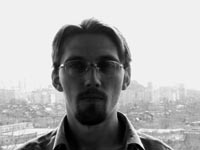