Infra Red Army is a project by Dmitry Soroka – Ukrainian musican. He was born in Mariupol, a large city on the shore the warmest sea in Europe – the Azov Sea. He finished music scool, where he majored in classical guitar. Presently, he lives and works in Kharkiv. Dmitry started to composing music in 1994. From the very beginning. he did not folloe the mainstream. Instead, he was into „strange music“. Initially, he tended to stay within acoustic guitar sound, but later his interests broadened to coputer-based electro-acoustics. In spring 2003, „Black Body“ the first Infra Red Army album released on Ukraine Nexsound net label of Andrey Kiritchenko and Kotra, as well as some record compilation appearances was done.
If you try to interpret the name of the project as a concept, you may well find all corresponding connotations in Infra Red Army music: an interest in Infra – the Inner; the present of the Warmth, as the animal , or better still. live part of the spectrum; the onward march of what is yet to come from the outside. At the same time, it ia an inner revolution movement, and the Army of Warmth. The Infra Red Army music is not extreme in its form, but dramatic and capable of creating almost tangible emotional effects. 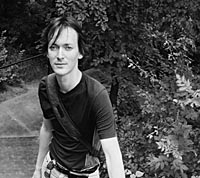