Chilo aka Chilo Eribenne is a charismatic London based turntablist, vocalist, performer and one of the most funky’n’blasting DJs around. She first came to public recognition when she performed and toured the world with S’Express fame back in 1988 as the silver platform booted funky Diva. It was the period of their first album entitled „The Original Soundtrack“, which included the number one singles „Them from S’Express“ and „Hey Music Lover“. Disillusioned with the shallowness of her role, she left in 1990 to develop her singing and song writing abilities. Later she recorded with Acid House producer Richard Salt (Baby Ford), Ian Loveday (EON), Renegade Soundwave, Dub Star, soul Diva Jocelyn Brown, Charlie Watts and Holger Hiller. Live-performances with members of Apollo 440 and Asian Dub Foundation. Chilo made vocal contributions on Andy Bowmans Techno recordings (Gecko). After spending some years in Vienna, she has returned to London to collaborate with female musicians on a live and recording arts project called Chicks the group being called Chick Wings. 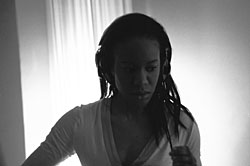