Lithuanian experimental electronic musican and psychologist Richardas Norvila aka Benzo has started to fiddle around with electronic since the age of 14, finally 1998 he started the audio-ethnographic project Benzo. He loves the noise of Moscow, the city where he lives, a combination and influences that hums like a merciles meat grinder mixing together everything russian, tartar, armenian and azerbaijani. This all forms the basic for his music which loner Norvila produces in his studio.
He is known as the king collector of original old synthesizers and electronic instruments from the soviet times as well as user of handcrafted electronic instruments made by technic specialists. This combination generates the essence of his highly recommended deffinition. 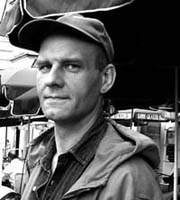