Obsessive music-maverick Elvar Már Kjartansson aka Auxpan is based at the capital of Iceland, Reykjavik. This young sound-crafter with knack for creating selfdeveloped original apparatures, is not so interested in the music itself but much more in what kind of sounds it is possible to make using his machines. Auxpan uses a few oscillators, old amplifiers and the trashiest imaginabel lo-fi appliances, parts of his toneproducers and generators he built into the oddest containers, such as cigarette boxes, pastille or metall biscuit tins, fitted with dials and switches, combining them with contact microphones or repragrammed sound chips from birthday cards. Even his name is a derivative of his tinkering talent – it is programm: Aux(iliary) Pan(el). Techno-saavy Auxpan has created music where sound bytes, rhythmic patterns, fieldrecordings and words come together to form an experimental DIY sound. The self-taught tinkerer’s groundbreaking sound is part crunching electronica, part soothing ambient. And he has been building quite a reputation for himself in diving stages on the international festival scene. 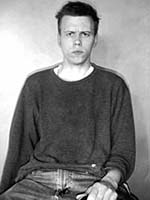